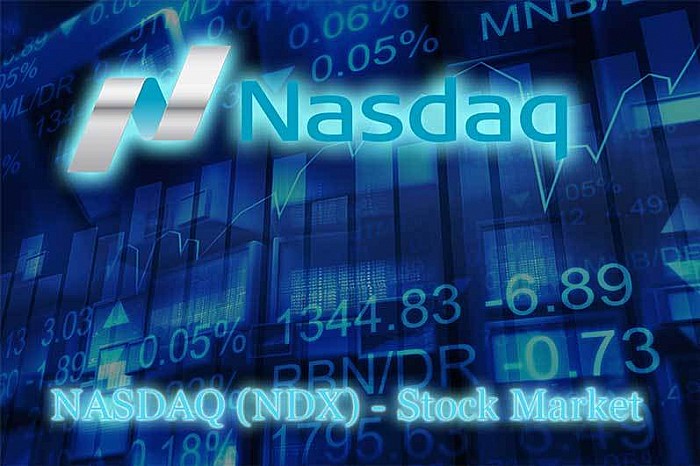 Testing resistance or up-trending for NASDAQ

NASDAQ is the second largest exchange in the stock market after the NY Stock Exchange with a total market cap of $10 trillion. 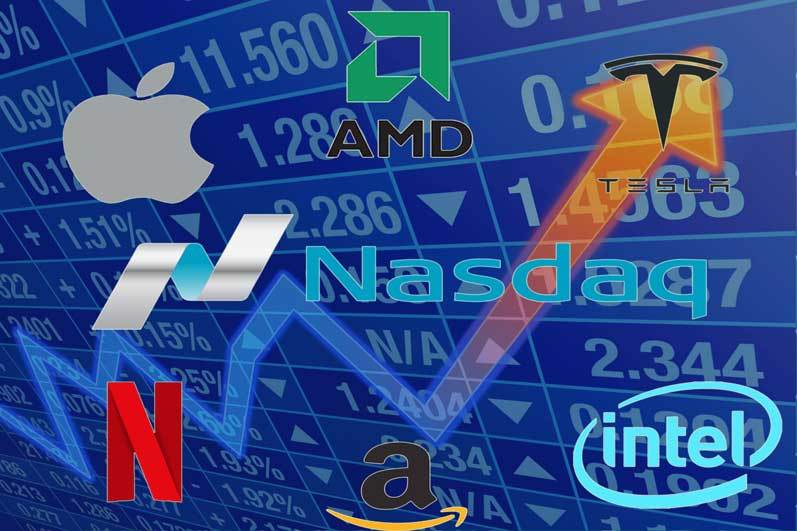 Let's discus the potential for this index and speculate to where the prices might reach on end of this year.

What is NDX and what are driving its price to to move this high. First and four most, under NASDAQ we can identify the top 100 technology companies. We will focus of the companies under NDX and identify what they are bringing to the index. The growth of NASDAQ is due to the fact of technology moving forward and we can find ourselves in a digital era. Assuming that unless we are facing a new ice age or starting of WW3 technology will grow evermore.

Stocks such as Apple, Amazon, Tesla, Netflix, Amd and many more are the companies who drives the prices of Nasdaq. Individually, every single company stock price is listed quarterly. The year is divided into 4 quarters, and each of them is a unique earning season. The last season of the year is staring this September. Historically speaking every single share on the stock market had up and downs but for the overall long term gains all performed amazingly. Starting with aapl releasing new IOS's, Mac Books, iPhones and other firmware solutions improving stability of its platform. For the past 3 years, Apple attracted more new users who purchased devices from MP3 players to high end platforms. Developers, content-writers, web-developers, graphic designers and other similar industries heavily demand Apple for their software stability.

Looking at the chart bellow we have a clear view of Apple's gains, closing at the highest price yet. 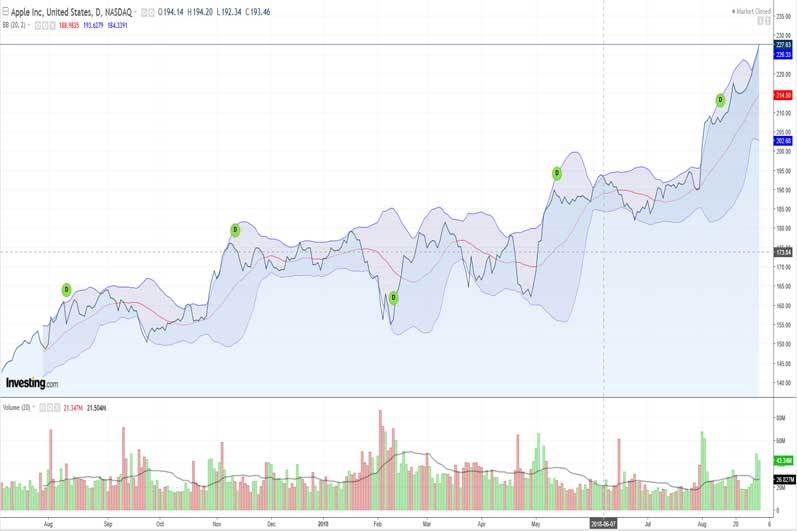 Amd and Intel the major producers of processors chips used by all manufacturers for all industries. Starting from mobile-phones to saving lives technology is playing a very important role in our lives. Even if individually Amd and Intel competes in quality and affordability both proved to be similar and yet very different. Intel shifted to multithreading processors, very expensive limiting their use for the average consumer. Amd focused more on processors designed to be as fast but more accessible and played a major roll in the gaming industry. The Gaming industry, believe it or not, picked up for the past 5 years and it coined what is nowadays called Esports. This boosted the usage of PC related products and the users increased dramatically being consider one of the future jobs. Many aspiring teenagers want to become professional gamers and many generation after them will want the same. We will have a look at the charts below for a clear view of the two with major gaining potential and a general view of Nasdaq. 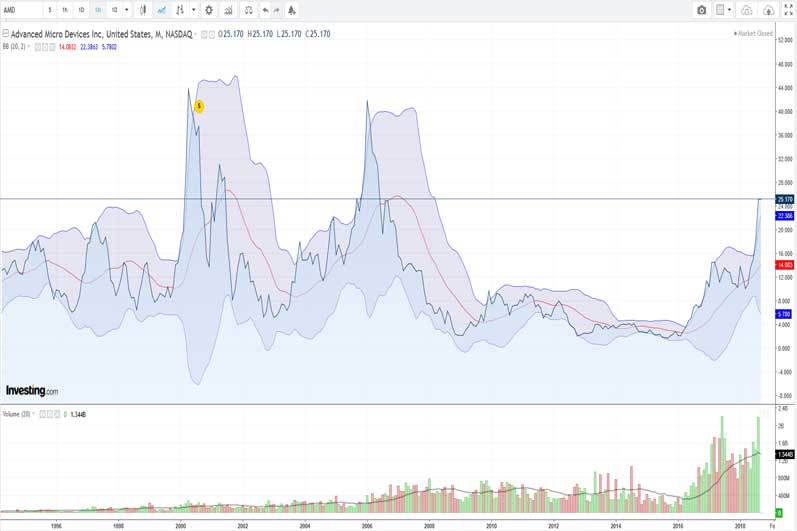 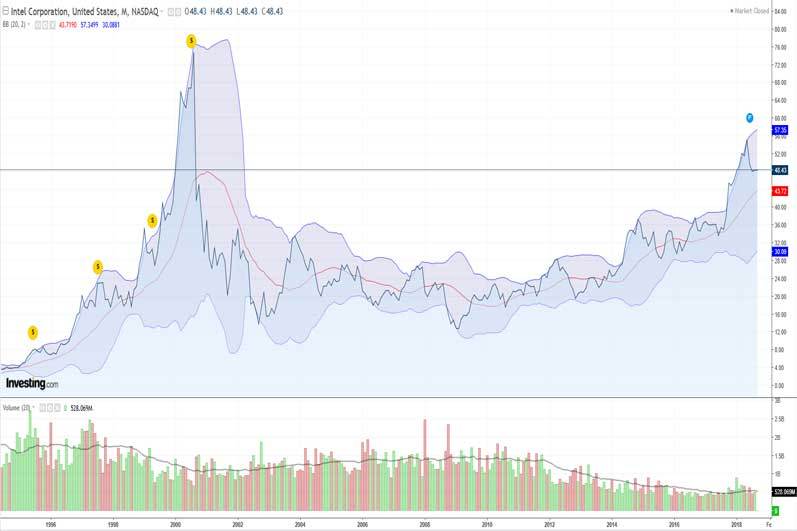 Tesla is a delicate subject with a visionary CEO and inventor, Elon Musk who is constantly getting mix reviews from the press. Billionaire Elon M. made a somewhat disturbing tweet calling a British diver "pedo". That's not the only time Elon M. make's such statements or making reporters look like kindergarten kids. But the worst of them all was in March when a Tesla driver was killed while test-driving an auto-piloted Model X. Tesla lost a massive percentage on the stock market and it's slowly trying to reverse as we can see on the chart bellow. Elon M. still proved to the world that his not just a visionary and succeed in many of his projects. Space X being the biggest of them all, proving all that were against "I know better". People like him make the world "tick" and they don't hide behind well pitched stories hiding their true nature. 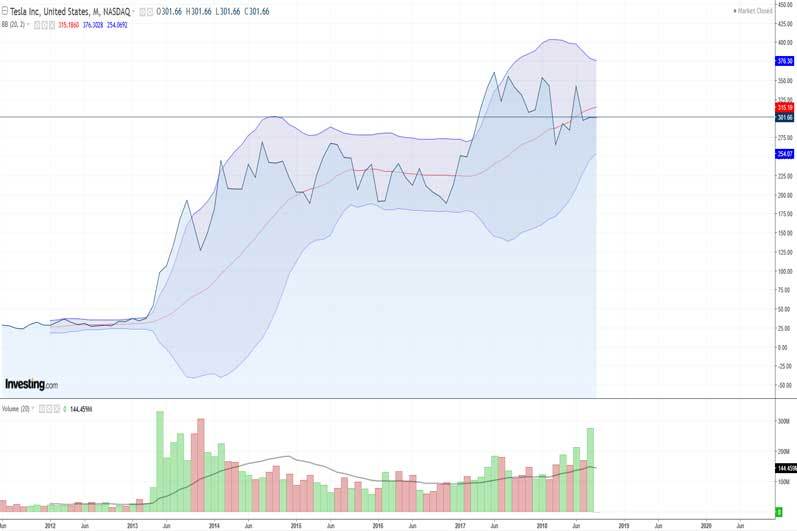 Having the short chart analysis from above it is safe to speculate on overall growth of the index. Companies not mentioned are doing just as well if not better in some cases. Main focus will be the earning season for the last quarter where considering upcoming Christmas and new products can push the index even higher. Trading NASDAQ will make one rich? The answer is "POTENTIALLY" is always good to check mid quarter to identify how many of the 100 companies gained. Then build a strategy around Nasdaq and consider always the risk and gain aspect of the trades. 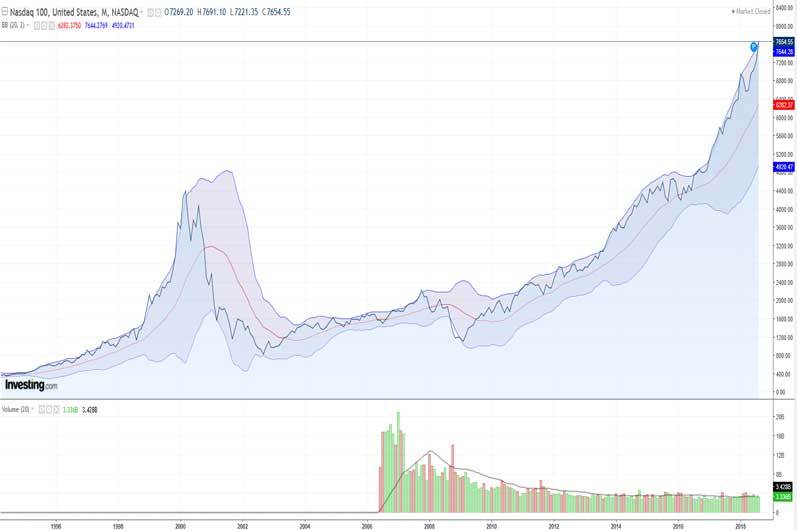 In all charts we used bollinger bands and monthly time interval for long term perspective on how the stocks and index might behave in the stock market. Once you review these charts, you prepare a strategy having Nasdaq in mind and are ready to roll... Try your trading style live!