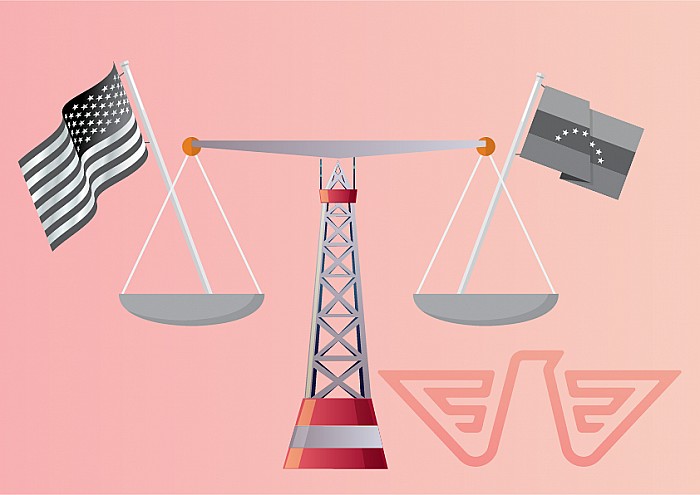 Venezuela and Russia scheming against the U.S.?

Venezuela oil seems to be having another crisis on its hand. After the allegations of them scheming with Russia to avoid U.S. sanctions. And by the looks of it, they involved India’s company Reliance on the scheme.  Also, the Russian company Rosfnet is taking advantage of the situation to gain more power in the Venezuela oil industry.

It looks like the controversial Venezuelan president Maduro is directing cash flow from Venezuela oil sales through Rosfnet. Using the Russian energy giant; he is trying to evade U.S. sanctions, that he believes is a way to dethrone him. This is a sign that Venezuela’s dependence on Russia is growing. As a result of the U.S is imposing its power on them financially. With its declining economy from years of recession and Venezuela oil stagnating; they already didn’t have the means to finance imports and government spending before U.S set sanctions on the Venezuela oil company PDVSA. Venezuela oil accounts for more than 90% of its exports. Also, it is the most significant share of government revenues. For that, Maduro is accusing U.S. president Donald Trump of leading an economic war against them. As a result, since January, Venezuela and Russia have been talking about possible ways to avoid the ban on clients paying PDVSA in dollars. Also, Russia commented on the sanctions in public; saying that it is illegal what the U.S. is doing and that they are going to help Venezuela in this crisis. Reuters uncovered a scheme that Venezuela oil company PDVSA is passing invoices from its oil sales to the Russian company Rosneft. That means that the Rosneft pays PDVSA instantly at a discount, which helps them avoid the usual 30 to a 90-day timeframe to complete an oil transaction. As a result, they collect a full amount later from the buyer. Also, other big energy companies such as Indian’s Reliance industries were asked to join in the scheme by paying Rosneft for Venezuela oil.

Venezuela loaned from Russia almost $16 billion since 2006, which they are repaying in Venezuela oil. Also, Russia has taken significant stakes in Venezuelan oil projects, which means that they already have a large slice of Venezuela’s production. Venezuela oil company PDVSA has unusual payment agreements with Rosneft, which are part of the schemes by the Venezuelan government to have access to cash. Also, they sold Central Bank as a way to gain access to cash. All these schemes left Washington officials wondering why sanctions didn’t have more impact on Venezuela’s finances. Some sources are saying that the money was moving from Russian-Venezuelan bank Evrofinance Mosnarbank. However, people form Evrofinance have denied such transactions happening.

It isn’t known how much precisely of Venezuela oil exports of approximately 900 thousand barrels per day were paid for using the sale of PDVSA’s accounts receivable, thanks to the deals being arranged on a case by case basis. In an internal PDVSA document, it was shown that Venezuela oil shipments to Reliance in April, would be settled through Rosneft. Reliance has imported almost 40% of Venezuela's oil exports in March.  So in the document, it was indicated that PDVSA and Reliance would pay a fee of around 3% of the sale price, which would be split between them. Also, all of the Rosneft’s fees were going to be negotiated for every case. However, on Saturday, Reliance has said that the claims that they were purchasing Venezuela's oil from PDVSA for payment in cash to the third parties are false. Reliance had said in their statement that they were buying Venezuela oil through companies such as Rosneft before the U.S. imposed sanctions on Venezuela oil. Also, after the sanctions, they were sure to have approval from the U.S. Department of state before the purchase.

Even before the U.S. sanctions, Venezuela oil exports were cut in half from 2.8 million BPD when Maduro’s predecessor, Hugo Chavez, launched his Socialist revolution. So Rosneft managed to capitalise on the crisis and gain an even more significant share of the Venezuela oil industry, which has one of the largest crude oil reserves in the world. Now Rosneft is giving cash to help keep PDVSA afloat. So the Venezuela oil crisis is helping Russia gain even more power in the oil industry.

It seems that Venezuela has found a way to avoid the sanctions imposed by the U.S. government. However, it did cost them a part of their oil industry, and that’s where Russian energy giant Rosneft gained. So how will this whole situation end? Who knows? For now, the situation is so twisted it cannot be untangled. We will just have to wait a while for the conclusion of this whole situation. The question is if the U.S. will manage to impose its will to take down the Venezuelan government or will Maduro prevail in this fight.