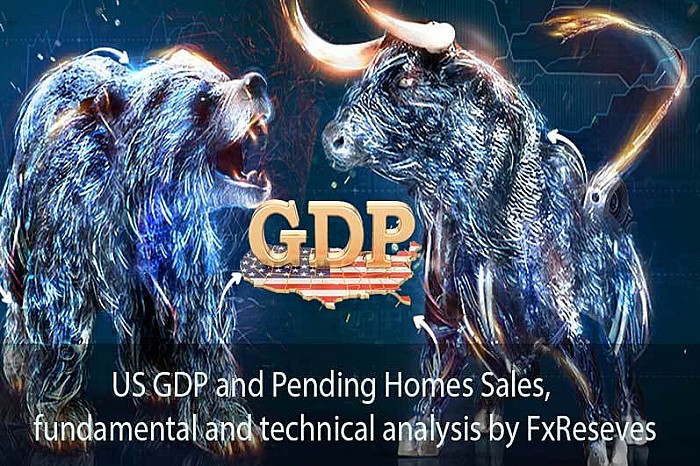 US GDP And Pending Home Sales


Understanding the importance of GDP announcement is the key to performing an accurate fundamental analysis.

US GDP is an event that manifests quarterly and comes in 3 versions - advance, second release and final release monthly. Both advance and second release are preliminary in the economic calendars.

How is GDP impacting the US economy?

First and foremost gross domestic product monitors the changes for the inflation, calculating the values of services and goods generated by the economy. This type of measurement is considerate the primary indicator for economic growth and health released by Bureau of Economic Analysis. A positive reading applies when the actual number is higher than the forecast number. Higher numbers than the previous will point in currency appreciation. At the same time, GDP price index "qoq" will be announced from the same source and it can be interpreted as bullish/positive if it's higher than expected and it will be bearish/negative if the results are lower than expected for the dollar. Reading the chart below that measured gdp for the past year clearly points to a 1-year high (source investing.com).

Following the report release from the economic calendar, it is safe to assume economic growth. Trades on pairs is a variable since we analyzed only the dollar, at this point buying dollars is a pure gambling. For example: taking the good announcement on the dollar and pretending we have a bad one for the euro, choosing the pair is easy Eur/USD. Trading the pair, in this case, eur/usd the action and trade to be taken would be a sell position, since EUR is the base currency and USD is the variable (1 euro = 1.17 USD with the current exchange rate).

Retail traders commonly practice the same mistake and that is trading before the event when reports are not clear. How can retail traders improve their skills or become skilful is a matter of practising to perform relevant economic readings. Experimenting with Demo platforms from various brokers is free and like all skills, practice makes it perfect. Good luck in all your future GDP events trades.

National Association of Realtors measures the pending home sales. They count the total number of homes to be sold under contract, which are still pending transactions. Tracing the actual report from the economic calendar it is safe to speculate declines on home purchases.

Both events can point a trend where one sentiment differs from the other, but similar in logic. Consumer expenditure and initial jobless claims will be other exciting future subjects.